Shopping Cart
Your Cart is Empty
Quantity:
Subtotal
Taxes
Shipping
Total
There was an error with PayPalClick here to try again

Thank you for your business!You should be receiving an order confirmation from Paypal shortly.Exit Shopping Cart

The common decency of cooking breakfast

Well, I said I might blog about the night shelter  - or more precisely, me helping to cook breakfast for the guests there - and the more I thought about it, the more convinced I became that it was a good idea. So, here I am.

I love it. Yes, I really do. I’m a morning person by nature. It’s little trial for me, really, to be up early enough to leave the house in time to start cooking by about 6am… Though of course, actually getting dressed and actually leaving can feel like a trial occasionally… But essentially, I enjoy walking through the dark, quiet streets, serenaded by early blackbirds, sometimes surrounded by the brilliance of a hard, moonlit frost.

When I get there, people are beginning to stir. There’s usually a calm, quiet, warm atmosphere. I light the ovens and start to prepare the food. Other helpers arrive and together, we put on the urn to heat water, get hot drinks going… It’s good to be working together with people and for people. (I love my solitary life, working alone, from home. I’m a hermit at heart… But this makes the occasional foray into being with people (other than my household) and pulling together as a team something that’s slightly novel and exciting and enjoyable.)

Walking home, yesterday morning, it was still early - on a Saturday morning, still too early for most people to be out and about. I saw chaffinches, listened to blackbirds, paused to enjoy the first blossom of the season and smile at the sight of daisies pushing through the February grass. It felt good.

It felt good, but not entirely for the reasons people might think. Cooking for homeless people might sound ever so virtuous. It might sound like a “feel-good” activity. For me, it’s become something I struggle to imagine not doing, knowing that the people who need the breakfast are there, and when people pat me on the back for doing it, it takes me a little by surprise… I mean, why on earth wouldn’t I do it? And yet, I do understand their response. I think, to an extent at least, it comes out of misunderstanding. I think they imagine that I’m going and cooking for down-and-outs, untouchables, people who’re different…

I wonder whether they’d think it was virtuous if they realised that when I cook for homeless people, I’m cooking for people just like me - that this makes it, not virtuous, but basic human kindness. Foundation level kindness. Or, not even kindness, but basic respect...

“Homeless person” might conjure up certain images. Whatever those images are, if they’re all along the same lines, they’re inaccurate, because homeless people, at core, have only their homelessness and their humanity in common. (Of course, as in any group of people, individuals find others who share common interests and so on, but that’s not because they’re homeless; that’s because they’re human.) Homeless people are simply people who for a any number of reasons have, for this time, nowhere to live. That’s all. They’re not distinguishable as homeless, often, until you ask them, or until they appear on the other side of that serving hatch and thank you for their meal. Even then, sometimes, you might not quite believe it. The person who’s been sitting playing concert-standard piano in the corner of the hall? The person who used to help run these night shelters, before he fell on hard times? The very well-presented, well-spoken lady who, frankly, looks more composed and respectable than most of us who’re doing the cooking? Really?

Yes. Really. Over the years, I’ve met all sorts of people who are guests at the shelter. Handsome young men with sweet smiles who say please and thank you and who, if my daughter, in fifteen years or so, brought home, I’d be quite happy. Quiet women of my own age, who just want a cup of tea as they wake up slowly. The very gifted pianist who came to the UK because things were impossibly hard back home, and discovered that things aren’t really any better here… And the relatively successful people, who’ve had happy family lives and enough of everything. People who once helped out as I do now, but who lost everything because of basic misfortunes that can happen to anyone. Anyone.

What I’ve realised, more than anything else, doing these night shelter breakfasts, is that the guests are not charity cases. I’m really, truly, not being super-virtuous, cooking for them. I’m not being a do-gooder, for the simple reason that these people are me. They’re my parents, siblings, friends. Or they could be. They could be absolutely anyone. Or any one of us could be them. They’re not charity cases, they’re just human beings whose lives have gone awry - and, quite often, not through any fault of their own. I’ll say it again: I’m not super-virtuous. I’m just making sure that my parents, siblings, friends - my self - (or people who could be) are getting a good breakfast before going back out onto the streets. So, although I enjoy doing this, meeting the people, interacting and so on - and although I do feel glad that they’ve had a good breakfast, at least - I never feel completely “good” about things when I leave. It’s not a “feel-good” activity in the sense that some people might think it would be. More than anything, I wish, deeply and painfully, that I could do more.

What does feel good - the feel-good things, for me - is the teamwork that takes place to put breakfast on the tables, the interactions with the guests - people I’d never otherwise meet, who despite their circumstances, are capable of smiling at me, making eye contact and exchanging friendly words, the moonlight on the dark streets, puddles in the road reflecting the light of dawn, chaffinches preparing for spring and the first blossom of the year. All of these, and most of all, a sense connection with them - with all of them: of lives shared with people and birds and quickening flowers - and of common humanity. And yes, too, the tiny smile of hope that despite the enormity of the problems in the world and the fact that I wish I could do more, there’s always something I can do to make things slightly better for someone. A smile, a kind word, hot coffee and a snack for the person sleeping on the street corner asking for pennies… Or a hot breakfast in a place where people care. 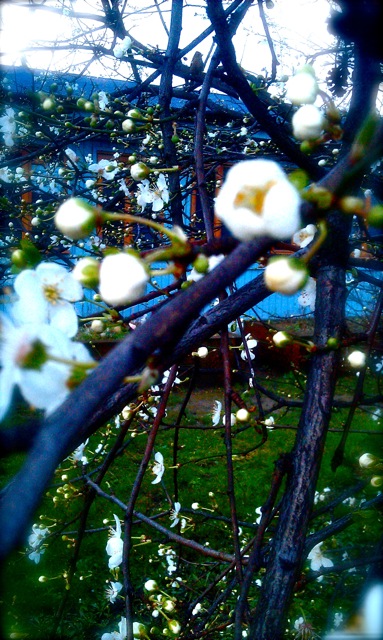